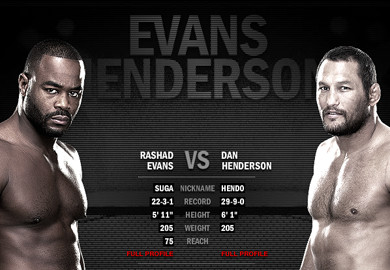 The Ultimate Fighting Championship is making its debut inside Winnepeg territory tonight with UFC 161: Evans vs. Henderson live from the MTS Centre.

The main card is scheduled for a pay-per-view only broadcast and will be headlined by a light-heavyweight fight between Dan Henderson and Rashad Evans.

If you can’t make the broadcasts for these bouts or simply missed them, have no fear. BJPENN.COM will be running a live play-by-play of all the action below:

Round 1 – This fight started out quickly as Pat came out throwing kicks and keeping his distance early. The two circled one another but failed to throw anything significant at first. Barry  stood still in front of Jordan in an attempt to spark offense but was countered with a Jordan left which rocked Barry. Jordan was unrelenting with his attack and chased Barry down, dropping him against the cage and finishing the fight with a flurry of strikes.

Shawn Jordan defeats Pat Barry via TKO at :59 of Round 1.

Round 1 – The woman had their turn as Alexis Davis and Rosi Sexton sought to keep the finishing streak for women in the UFC, of 3 in a row, alive. The women came out swinging immediately and the brawl began immediately. Both threw haymakers and came forward until they collided in to a clinch. Davis controlled the clinch landing knees from the clinch as well as elbows. Sexton stayed busy, though, and threw shots to Davis’ body. Davis eventually let the muay thai clinch go in favor of double-underhooks. Davis couldn’t secure the takedown and the two split. The brawl resumed right away until Sexton was able to get a takedown of her own. Davis continuously threatened off her back, locking in a loose triangle. She held on to it, slowly tightening it with her ankle under the opposite knee. Sexton kept her strikes going and stayed on her feet, in an attempt to survive the triangle attempt. Sexton used the cage to keep Davis at an awkward angle that prevented her from finishing the triangle. Sexton was able to escape momentarily and made the most of it, landing a few punches, before being put in another triangle. Sexton made sure to stay busy in the triangle as the fight ended with Sexton throwing punches from the triangle as Davis tried to submit her.

Round 2 – The second stanza started in a similar fashion to the first, with both coming to the middle of the cage and exchanging shots. It was Sexton who took control of the clinch this round and was able to throw Davis to the mat, while securing half guard. Davis attacked the leg of Sexton and used that to sweep Sexton, and ended up on top. Davis worked the body of Sexton, while unable to pass guard, and scored points after a round that isn’t safe to give to anyone given the reputation held by MMA judges. Davis postured up and began to rain down shots on Sexton, causing her to scramble and give up her back. Davis sunk in a rear naked choke on the chin of Sexton from her back but was unable to finish the fight. Davis let the submission go and locked in hooks on Sexton. Davis then punished Sexton with continuous punches which forced referee Herb Dean to warn Sexton several times to fight back, but the round ended before action from Dean was necessary.

Round 3 – Davis took control early in round three, holding the center of the Octagon down. Both fighters were visibly tired, yet still more than willing to trade. They threw mirror image counters at one another until Davis shot in for a takedown which transitioned first to a leg lock attempt, then to back control for Davis who locked in a quick body triangle. Davis slipped to her own back with Sexton on top but still threatened often, against any piece of Sexton that she could get ahold of. Sexton was able to take control of the ground game, landing in Davis’ guard and working her ground and pound to soften Davis. Davis rolled out to escape her back but was countered as Sexton took Davis’ back. Sexton was unable to work significant offense and was placed on her back. Davis stood up and parried upkicks from Sexton as the fight came to a close. This marks the first time a women’s UFC fight has gone to decision in a serviceable effort by both fighters.

Round 1 – This light-heavyweight fight started out as both men came out jittery, throwing quick shots until Jimmo grabbed a clinch. Jimmo held Pokrajac against the cage and threw knees to the legs of Pokrajac. They were broken up by referee Yves Lavigne but resumed the position almost immediately, just to be split again. Both stood right in front of one another and looked to counter. Pokrajac shot in, getting a clinch of his own, but failing to work anything substantial into it. Lavigne once again separated the action. Both men seemed happy to sit in the clinch, locking one up again =, just after they were split. Jimmo started to fall back with Pokrajac on his trail throwing bombs, none of which landed. The clinch made another appearance shortly after, much to the dismay of Yves Lavigne. Pokrajac became the aggressor, chasing Jimmo down, only to be countered. Pokrajac was able to stagger Jimmo during one chase but Jimmo recovered quickly and showed intelligence in defending himself for the rest of the round.

Round 2 – Jimmo opened round 2 with a leg kick to Pokrajac. Jimmo dropped Pokrajac in this round, pouncing on him immediately. Pokrajac kept his wherewithal and survived the onslaught, ending up in his own guard with Jimmo on top. Jimmo worked shots with insufficient power on Pokrajac. Jimmo remained on top and scored bog points, but was unable to put Pokrajac in trouble. Jimmo was tagged with an upkick during a brief stint on his feet but dropped back down in side control. Jimmo stayed on top to finish off an uneventful round.

Round 3 – Both men started slow in the third, until a clinch was put in by Jimmo. Pokrajac used the clinch to throw Jimmo but was reversed and place on his back. Jimmo went back to his second round strategy and held Pokrajac down with little in the way of offense. Jimmo did nothing more than score points during the middle stages of this round, holding Pokrajac down. Pokrajac was able to sink in a guillotine choke but was unable to close the show, as Jimmo stayed patient and worked his way out. Pokrajac worked his way up and caught a knee for his efforts. The two stayed in the clinch while on their feet as even the commentating team of Joe Rogan and Mike Goldberg seemed to lose interest. Lavigne separated the with 30-seconds left in the round as Pokrajac attempted to make the fight a brawl but was stifled by a Jimmo clinch.

Round 1 – Both men came out hard0charging. Nelson looked for huge haymkers to make short work of Miocic. Miocic stayed wary of the right hand of Nelson, circling to the right any chance he had. Nelson did land a glancing overhand right but Miocic walked through it, landing a few shots of his own. Miocic stayed on his toes, using lateral movement to avoid Nelson’s strikes. Miocic staggered Nelson and sprawled for a takedown as he built confidence for himself. Miocic used his reach advantage to stay on the outside, forcing Nelson to telegraph his punches. Nelson slowed later in the first, catching every punch thrown by Miocic. Nelson was rocked again and tried to find his footing as Miocic poured on his offense. It appeared as though Miocic had built confidence and took round one.

Round 2 – A visibly exhausted Roy Nelson came out in the second, to an onslaught of Miocic strikes. Nelson chased the much fresher Miocic around the cage, winging shots past Miocic’s head. Nelson had used up his gas tank and was tee’d off on whenever he felt. Nelson was constantly hit with punches as Roy had little to offer, even leaving his hands dropped while approaching Miocic. Roy landed an uppercut of his own but was too tired to chase a possibly stunned Miocic. Miocic recovered from the shot and kept to his gameplan, now made easier by a worn out Nelson. Round 2 ended with Miocic in complete control of the fight as Nelson had nothing left to offer.

Round 3 – Miocic remained offensive against Nelson, using jabs and combos to work Nelson down. Nelson’s chin was on display as he ate each shot and continued to push forward. Nelson looked only to land the overhand right as Miocic jogged around the Octagon, letting Nelson gas out even more while chasing him. Nelson was tripped up by an ankle trip by Miocic but the Brazilian jiu-jitsu black belt got back to his feet, ending up in the clinch of Miocic. The clinch was separate and Nelson kept plodding forward with his hands on his hips. Miocic kept active and moved around, showing off his impressive cardio. Nelson let the clock run out, getting hit with everything Miocic threw.

Round 1 – Both future hall-of-famers started slow, gauging reach and distance. Hendo used a feint to get close and the two exchanged heavy shots. Evans stayed light on his feet and opened up with combinations, all with malicious intent. Hendo stayed low in his stance with his right hand cocked back, waiting to let it go. Evans maintained lateral movement to keep Hendo off-balance. The two wrestling stand outs clinched but neither could take the fight to the ground. Hendo moved in, shuffling along and rocked Evans with a stiff jab. Evans was rocked, backing up quickly. Evans was able to survive an attack by Hendo and retained his composure to finish out the round on his feet.

Round 2 – Evans looked recovered in round 2 and was able to drag Hendo to the mat, but only momentarily. Evans maintained back control while standing and worked for adventitious positioning. On the break, both landed good punches with Evans landing more frequently, damaging Hendo. Evans clipped Hendo again, chasing him to the cage wall. Evans started to loosen up at this point in the fight. Evan kept Hendo’s back against the cage and used his speed and stiff jab to slow Hendo. Hendo was able to stuff a takedown attempt by Evans and threw him aside but never followed up on it. Both men fund their home late in the second as Hendo was able to bloody the face of Evans. Both men ended the round standing still, staring each other down.

Round 3 – Evans landed early, staggering Hendo and landing a significant amount of punches. Hendo survived and sought to score points of his own. Evans clearly had the crisper striking, picking Hendo apart in the third. Hendo stopped moving forward at this point, allowing Evans to take complete control of the final round. Evans engaged in a clinch, most likely tiring the already gassed Hendo out. Evans let loose again but went for a takedown, seemingly as a trophy against the decorated Olympic wrestler. Evans seemed to not want to open his striking up even though he had hurt Hendo when doing so earlier in the fight. The fight concluded with Evans tagging Hendo and picking his last few shots carefully.

Shawn Jordan defeats Pat Barry via TKO at :59 of Round 1