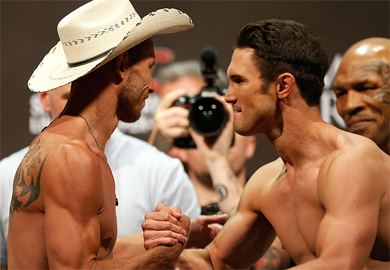 To kick off UFC 160 Strikeforce veteran KJ Noons made his UFC debut against The Cowboy Donald Cerrone.

Cerrone is coming off a KO loss to Anthony ‘Showtime’ Pettis this January while his opponent, the Hawaiian KJ Noons is 1-4 in his last 5, with his last fight being a loss to Ryan Couture in January.

After a fairly even first round Noons began gassing in the second, eating many shots from Cerrone, but landing a beautiful spinning backfist. In the third Noons came out a bit more energized, and a lot more bloody. Cerrone quickly took Noons down in the third and Cerrone landed brutal shots from top position throughout the rest of the round.

In the end Cowboy won via unanimous decision.