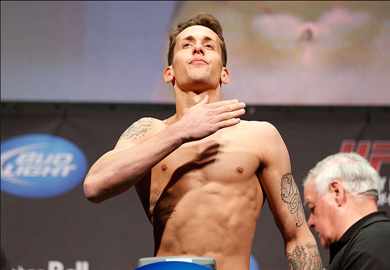 First round started as a feeling out process between the two Ultimate Fighter veterans as Ricci looked to get inside the much taller Fletcher’s range. Ricci found some success halfway through the round and seemed to loosen up as the round went on. The action stopped late in the first when a flush body kick landed low and caught Ricci on the cup. Ricci recovered quickly, however, and the action resumed. With just under 20-seconds remaining in the first, Fletcher attacked throwing a wild haymaker and catching a Ricci kick, and dragged him against the cage to end the first round.

A quiet first round led into the second round of the first main card fight. The first takedown came as the Tri-Star member, Ricci, caught a kick from Fletcher and drove him to the mat. Blood started to flow from the face of Fletcher from ground strikes landed by Ricci. The two scrambled on the mat and eventually made their way back to their feet. The round slowed down as the fighters exchanged leg kicks and half-hearted combinations to end the round.

Third round was Ricci’s as he controlled the stand-up and finished another takedown where he held Fletcher until the round ended. Ricci gets his first UFC win in his home country of Canada, bringing his record to 8-3.

For a Play-by-Play recap of tonight’s event visit BJPENN.com