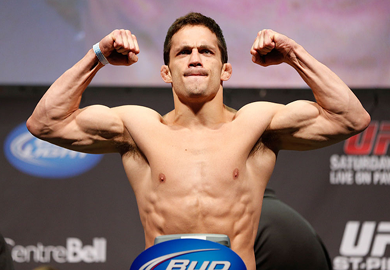 Two elite fighters went after a big win as both men landed hard shots early that had their opponent backing up. They remained active and the similarly matched fighters found their range early and started letting their technique take over. Ellenberger kept advancing until he countered a kick from Marquardt with a big right hand that buckled Marquardt. Ellenberger chased Marquardt to the ground and put ‘The Great’ to sleep half way through the first round.

Ellenberger moves up to 29-6 with a big win over Nate Marquardt.

Final Result: Jake Ellenberger wins via KO at 3:00 of Round 1.

For a Play-by-Play visit BJPENN.com