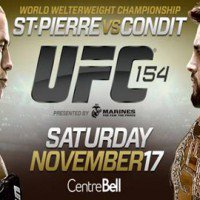 The fight will be St-Pierre’s first octagon appearance in 19 months, as he was sidelined due to a knee injury. The long time welterweight champion has won nine straight fights, while posting six consecutive title defenses over the likes of Jon Fitch, B.J. Penn and Josh Koscheck.

The former WEC champion, Condit, who won the interim belt with a February win over Nick Diaz at UFC 143, has reeled off five straight victories and has won 13 of his past 14, with his lone defeat coming at the hands of Martin Kampmann.

The co-main event of the evening is a No. 1 contender’s bout featuring welterweights Johny Hendricks (13-1 MMA, 8-1 UFC) and Martin Kampmann (20-5 MMA, 11-4 UFC). The winner of the contest is expected to face the winner of the GSP vs. Condit fight in early 2013.

UFC 154 takes place November 17th at the Bell Centre in Montreal, Quebec, Canada. In addition to the PPV main card, FX and Facebook are expected to carry the prelims.