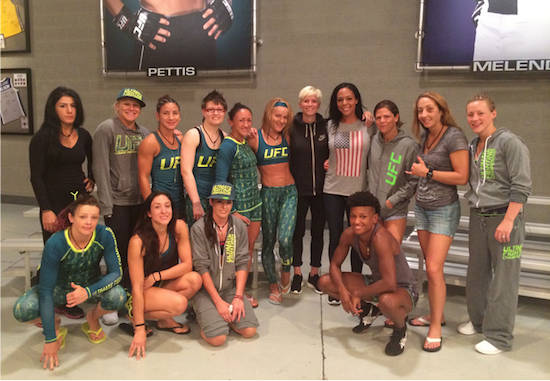 As anticipated, this historic season of The Ultimate Fighter: A Champion Will Be Crowned, the first-ever version of the UFC’s signature reality series to feature an all-female cast, has been full of exciting, competitive battles inside the Octagon, and long-running feuds outside it. In Episode 7, “Risk it All” airingWednesday, Nov. 5 (10:00 PM ET) on FOX Sports 1, a rift between members of Team Melendez, coached by UFC no.1 lightweight contender Gilbert Melendez, who have yet to win a match, is put aside as both teams get a visit from star athletes in another top women’s sport. U.S. Women’s National Soccer Team members Sydney Leroux (@SydneyLeroux) and Megan Rapinoe (@mpinoe) stop by to meet this season’s competitors and get an education in mixed martial arts.  The USWNT is fresh off securing a spot in the 2015 FIFA Women’s World Cup next summer in Canada on FOX after winning the 2014 CONCACAF (Confederation of North, Central American and Caribbean Association Football) Women’s Championship in decisive fashion with a 6-0 victory over Costa Rica.

“We go through a lot of the same things being a female professional athlete,” said Sydney Leroux.  “We talked about that and we touched on that.  One of the girls has a kid and we have girls who have children on our team as well and we talked about that.  There’s just a really big connection between female sports.”

In Wednesday night’s episode, No. 7 seed Rose Namajunas tries to earn Team Melendez its first win of the tournament, as she faces No. 10 seed Alex Chambers of Team Pettis, coached by UFC lightweight champion Anthony Pettis.