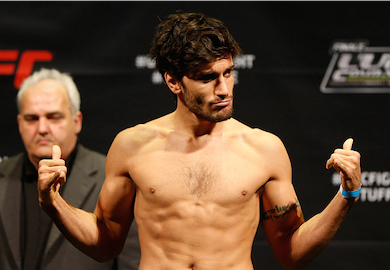 Sheldon Wescott looked to be doing well early on, but his high-octane offense caused an energy dump that he never recovered from.

Wescott looked to put Theodorou away early with strikes and he eventually found himself in a position to end the fight early. He was riding the back of Theodorou like a backpack looking for a rear naked choke. The issue was that his legs were only hooked in— he did not have the body triangle locked on. As a result of this, Theodorou was able to wriggle out of it and escape danger.

This is where it became obvious that Westcott tired himself out trying to end the fight too early. Theororou started to pick him apart with leg kicks and instead of defending takedowns, he executed a takedown late in the second round. He became only the fourth person tonight to finish a fight as he let a series of strikes crash on the head of Wescott which were never answered. It was not clear whether Wescott was too tired to try and defend or if he was in serious trouble, but either way he was not defending himself.

Elias Theodorou locked up a six figure contract with his TKO victory over Sheldon Wescott.

Elias Theodorou def. Sheldon Wescott by way of TKO (Punches) 4:41 of Round 2