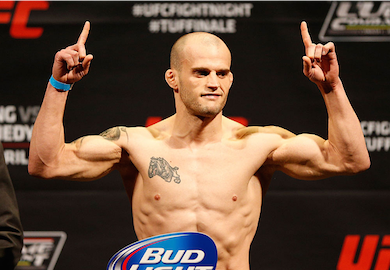 Tim Gorman made his octagon debut today and his test was a veteran in Mitch Gagnon. The fight was the first of the day and it aired exclusively on UFC Fight Pass.

Gagnon did a fantastic job at implementing his game and shutting down whatever offense Gorman was trying to get off. Gorman could not land a takedown and when he did, Gagnon would catch him in modified guillotines and almost submit him.

Tim Gorman showed great resiliency by escaping submission attempt after submission attempt. He found his way out of more than five guillotine attempts and used his body weight to shift out of a triangle. Despite getting tagged up by Mitch Gagnon’s fists, Gormon continued to press forward.

It was clear by the end of the fight that Mitch Gagnon had done more work and had landed more shots, but Gorman showed great heart and will have a future here in the UFC.