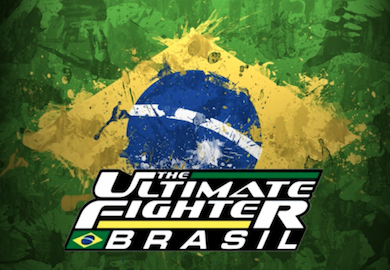 The first episode of TUF Brasil will be available, on demand, on UFC Fight Pass from 7pm PT/10pm ET on Sunday, March 9, just hours after airing on Brazilian television. Each new episode will then be available every Sunday at the same time.

Filming has already begun in Sao Paulo, Brazil and the bad blood between coaches Chael Sonnen and Wanderlei Silva has already resulted in incidents which UFC president Dana White could only describe as “crazy”, “nuts” and “absolute insanity.”

Bad blood has been on the boil between three-time UFC title challenger Sonnen and the legendary “Axe Murderer” for years and now that they are in close proximity to each other day-in, day-out, the pair is struggling to keep their mutual dislike in check.

Sonnen said: “I don’t quite know what to make of it down here. Wanderlei has already been an experience, to say the least. He’s like a cartoon character, he gets angry and runs out of words and steam starts to come out of his ears. He’s a caveman. But I feel sorry for him so I’m helping him get to where he wants to go – retirement.”

Former PRIDE FC world champion Silva said: “Sonnen messed with the wrong guy. Now his time has come. He’s fearful, afraid of me. For everything he said – now he has a payback. I’m here because of Brazil and the Brazilian fans. I’m going to give them what they want – the most exciting season of TUF ever.”

In addition to airing the entire series, UFC Fight Pass will also take subscribers behind the scenes with regular updates from Chael Sonnen, a teaser for which can be seen here.

He said: “We’re excited to confirm that UFC Fight Pass subscribers won’t miss any of the action from what is certain to be a crazy season of The Ultimate Fighter Brasil. Subscribers will be able to catch each installment on demand, within hours of the show airing on television in Brazil.

“March continues to be a huge month for UFC Fight Pass. On March 1, we have our second exclusive fight card, live from Macau, featuring top welterweight Dong Hyun Kim taking on the returning John Hathaway, a heavyweight battle between Matt Mitrione and Shawn Jordan and former No.1 featherweight Hatsu Hioki in a must-win fight against Ivan Menjivar.

“Then, on March 8, UFC Fight Pass will be the only place to see the stacked UFC London card, headlined by the No.1 ranked Alexander Gustafsson risking his title shot against knockout specialist Jimi Manuwa. The event will also feature a great flyweight fight between Ian McCall and Brad Pickett, Melvin Guillard taking on fellow TUF alumnus Michael Johnson and a battle between unbeaten welterweights with Gunnar Nelson taking on Omari Akhmedov.

“All that, plus the UFC Fight Pass Prelims, unrivaled access to the world’s biggest MMA fight library and now TUF Brasil – March is a huge month for UFC Fight Pass.”

UFC Fight Pass has already launched in the United States, Canada, New Zealand and Australia, with a $9.99 price point per month in all four markets. The service will be rolled out in other markets shortly, with content varying according to local television blackout rules.