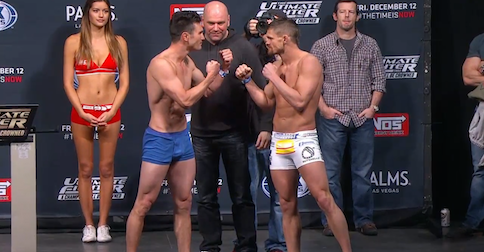 This potential fight of the night candidate was ended early when Cruicshank suffered two eye pokes. The result was a no contest.

After the first eye poke, Big John saw it and called a pause in the action to let Cruicshank recover. Cruicshank did not take the full five minutes and was able to fight shortly thereafter where the action resumed and eventually made it to a second round.

Noons, again, accidentally poked Cruicshank in the eye again but it was not caught by the referee. Noons continued to push the action and actually landed a knee to the body of Cruicshank. Cruicshank told Big John that he was poked in the eye and he finally halted the action a second time. This time, you could see blood was drawn from Cruicshank’s eye and a stoppage was likely.

Big John called the doctor into the octagon and to nobody’s surprise, the fight was waved off.

K.J. Noons and Daron Cruicshank fought to a No Contest (Doctor Stoppage) :25 of Round 2