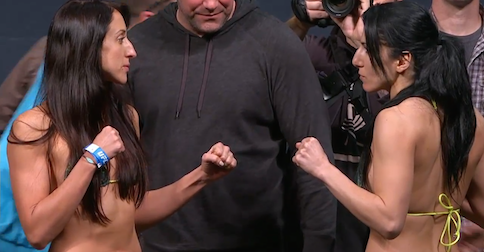 Fight of the Night: Jessica Penne vs. Randa Markos
This came to no surprise as Penne and Markos left it all in the octagon on Friday night. Both girls made it to the semi-finals of the “Ultimate Fighter” tournament and proved to the world that they could be contenders to the championship in the future. Penne and Markos both had opportunities to put the fight away throughout their fifteen minute contest, but they showed great heart and resiliency in their performance and made it to the final horn.

Performance of the Night: Yancy Medeiros
Medeiros is putting the pieces of the puzzle together and is finally starting to string together some impressive wins. His attack to the body of Proctor from the get-go seemed damaging, but Proctor was walking right through them. The ever elusive liver shot landed and Proctor crumbled to the mat. Medeiros did not over dedicate himself to finishing the fight with strikes and he went for a guillotine choke. Proctor was trapped in the hold and had no choice but to submit.

Performance of the Night: Carla Esparza
The new UFC Women’s Strawweight Champion is also going home with an extra $50,000! She walked into the octagon as an underdog and proved the bookies wrong when she submitted Rose with ease in the third round. Rose landed some great strikes in the first and second rounds, but Esparza charged through them and took the fight to the ground. She eventually transitioned to the back of Rose and submitted her with a rear naked choke.