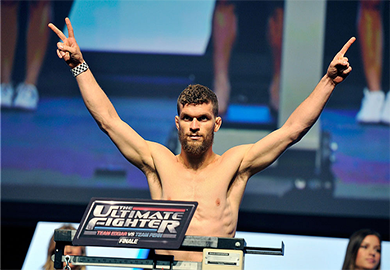 Dustin Ortiz and Justin Scoggins lived up to the reputation of flyweights in the octagon; They go as hard in round three as they do in round one!

Dustin Ortiz found success early with takedowns and utilized them to gain some momentum. He almost walked into an armbar but he powered through it and escaped after showing off some of his flexibility. His takedowns also padded his “Total Strikes Landed” number as he peppered Scoggins with shots while in top-control. At the start of the third round, he had more than quadrupled Scoggins’ total number of strikes.

Scoggins suspected he was down big in the third round and tried to make Ortiz pay for any wrong move he made. Their grappling scrambles usually led to a stalemate where Ortiz would power his way to the top and this benefited him when time expired for the judges’ decision.