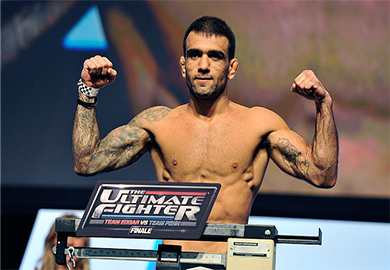 Leandro Issa may have broken the rules in the second round, but he almost broke his opponent’s arm in the third.

After a successful first round, Issa took two steps backward in the second when he grabbed the fence to complete a sweep on Tuerxun. Referee Mario Yamasaki paused the fight and stood both individuals up and proceeded to take a point away from Issa. Issa did not argue and when the replay showed, those in attendance voiced their disapproval as well.

Both Tuerxun and Issa were aware of the fact that they’d have to do work in the final round in order to take home the win. The way the judges have been scoring lately, they did not want this to go to decision. Issa took the fight to the ground quickly and almost locked in a guillotine from mount, but Tuerxun pushed through the pain and escaped.

Tuerxun was exhausted as a result of fighting off such a demanding hold, though. Issa dominated from mount and ultimately transitioned to an armbar where Tuerxun was forced to submit.

Leandro Issa def. Jumabieke Tuerxun by way of Submission (Armbar) 3:49 of Round 3