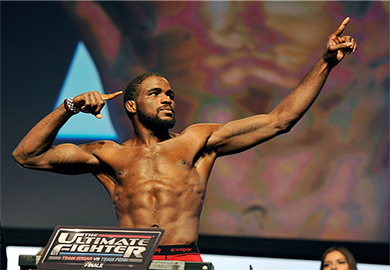 It has been the finale of finishes! This was the second Ultimate Fighter Tournament final tonight and it was the second finish in a row. This time, it was Corey Anderson knocking Matt Van Buren out cold to earn a UFC contract.

Anderson caught Van Buren off guard with a right-left combination when they met in the middle of the octagon at the start of the fight. From that point on, it was clear Van Buren was getting outclassed due to being wobbled from the combination.

Anderson headhunted for the following minute and Van Buren absorbed an uncomfortable amount of punishment. Van Buren resembled Chris Leben in the sense that he was eating shot after shot but continued to press forward. Eventually, it became too much for him to handle and he turtled up after getting dumped by Anderson. Anderson stood above him and fired off until the referee called a stop to it.

Corey Anderson may have a lot of potential, but maybe he should ditch his “Beastin’ 25/8” nickname.

Corey Anderson def. Matt Van Buren by way of TKO (Punches) 1:01 of Round 1