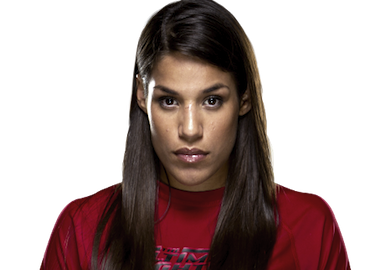 The lack of humility by Team Rousey made her victory that much sweeter.

“Shayna’s great, she’s ready,” said Rousey before the two squared off. “This other girl doesn’t deserve to breathe the same air as her, and she knows it.”

Boy was she wrong!

Here is what Pena told MMAFighting.com about her first victory in the house:

Shaun Al-Shatti: Shayna, in particular, really poured it on. She said you should’ve been coming to her seminars. She repeated that sort of sentiment over and over throughout the episode.

Julianna Pena: Yep, and it hurt her. When she’s on the bed talking about how I’m not the girl to put the stamp on her, from her body language, it didn’t look like she was really believing it. She was just talking to talk. For them to say things like, I don’t deserve to breathe the same air as Shayna, or, I can’t hold a candle to anybody she’s fought — it just really backfired. If she’s not going to be a little more humble in the future, maybe she should. Because I think, personally, she looks extremely stupid. It should make her take a little piece of that humble pie and shove it down her throat.

SA: Ronda got incredibly emotional afterward. Was that just for the cameras or did you guys see that too?

JP: No, I didn’t see that. But I definitely saw the dynamics change between her and Miesha after that. Obviously they’ve had their tiffs in the past, but for the most part, they were cordial with one another. Me and Miesha both agreed, ‘Hmmm, Ronda’s being nice. This is kinda weird.’ And then, bang! Right after that fight against Shayna, it flipped a switch. After that Ronda was a nightmare. She just couldn’t stand the fact that I took out her No. 1 pick. And yeah, it made her cry. That’s great. I made Ronda Rousey cry and I love it.

SA: When Ronda got angry and chastised Miesha for smiling after your win, you were right there. Was Miesha doing anything disrespectful or ridiculous, or was Ronda just being dramatic?

JP: Absolutely not. That was Ronda being a big baby. She was so upset that I won, she was trying to look for anything to use as an excuse to talk crap to Miesha. And she found it. Miesha was obviously happy for me. Miesha has competed against Shanya herself and has known Shayna for a while. Shayna is her friend. So for Ronda to be like, ‘You were laughing at my girl’s pain! That’s the reason why I’m going to destroy you!’ It was like, again, it’s just so dumb. Grow up. Miesha knows Shanya. They’re friends. She’s not smiling at her pain. She’s happy for me. Only Ronda would twist those type of emotions into something that would make it bad. Because that’s the way she thinks.