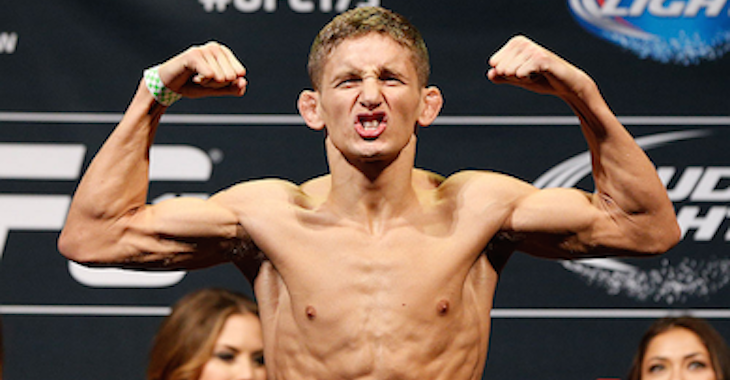 Team Alpha Male’s Chris Holdsworth has not fought since May of 2014, where he defeated Chico Camus via unanimous decision.

Before that fight, and before the previous fight, when he won TUF, he had suffered a concussion during training. He went into both fights anyway. After the Camus fight Holdsworth stopped fighting. From that second concussion he got eye strain and sensitivity to light and noise and those are just a few of the symptoms he suffered.

Since his last fight he’s been out of fighting, trying to heal up and waiting until he feels 100% ready to return to the octagon.

In a recent interview with ESPN, Holdsworth talked about his battle to get back into the cage and his new plan to avoid further head trauma during training.

“I didn’t know a thing about brain trauma before this. It’s been a big eye-opener. One thing I’ve been doing is trying to help my teammates train smarter. We were sparring way too much. We’d spar multiple times per week, five-minute rounds. It’s not good for you. And you get tired, it gets hot in California, you rip off the head gear. You really have to check your ego and do things right, play it safe.

“There’s going to be a major change in training, now that the head stuff is more of an issue. In football and in MMA, it’s a common topic. In the future, I won’t even spar much during a fight camp. There are other ways to get ready.”