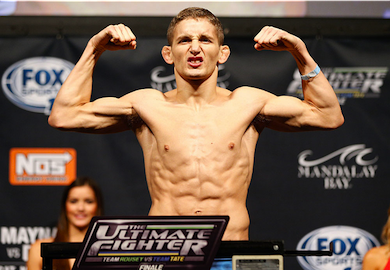 David Grant and Chris Holdsworth brought the crowd to life with their performance in the first round. Grant cracked Holdsworth with a combination early on, but it only brought the aggressive side out of his opponent. Holdsworth nailed Grant with a combination of his own and landed a big right hand that sent Grant stumbling back, but it led to nothing. The round ended with Holdsworth on top of Grant, essentially rewarding him the round.

It wouldn’t come down to points, though. Holdsworth was persistant with his takedowns even though Grant would initially stuff them. After eating a shin to the skull, Grant was dragged and tripped down to the ground in the second round and Holdsworth was relentless on top. While scooting his way to the cage, Grant gave up his back and Holdsworth jumped on it. Moments later, the rear naked choke was locked in and Grant had no other choice but to submit unless he wanted to go to sleep.