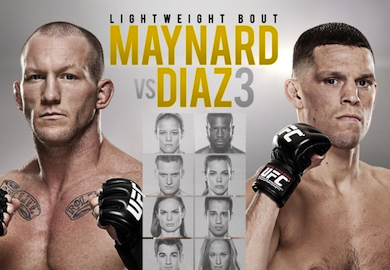 Fight of the Night: Ryan Benoit vs. Josh Sampo
This will be a night that Ryan Benoit will never forget. Benoit and Sampo were set to have their UFC debuts be against each other tonight but Sampo risked all of that when he missed weight yesterday. Benoit accepted the bout figuring it would keep him in the good-graces of the UFC Brass and, boy did that pay off quickly. They kicked the night off with an exciting back and forth fight that saw Sampo finish Benoit in the second round with a rear naked choke. Ryan Benoit and Josh Sampo were awarded Fight of the Night honors, but Sampo saw none of that money due to him missing weight. Ryan Benoit would get Sampo’s half, earning $100,000 for two rounds of action. Not bad for a UFC debut.

Submission of the Night: Chris Holdsworth
his was his fifth submission victory in a row, but this victory clearly meant the most to him. Chris Holdsworth remains undefeated in his professional mixed martial arts career after defeating Davey Grant to become the TUF 18 Season Winner. After a strike-heavy first round, Holdsworth took control of the bout in round two. After he crashed his shin into the skull of Grant, Holdsworth found himself on top of his opponent with some time to kill. He eventually transitioned to the back of Grant where he would force him to submit due to a rear naked choke.

Knockout of the Night: Nate Diaz
Nate Diaz looked like he had somewhere to be tonight by the way he was swinging his fists. He was taken down early on in the first round by Maynard with ease, but he popped right back to his feet and executed a beautiful toss takedown. They returned to the middle of the octagon and that’s where things went sour for “The Bully”. Maynard ate a straight left to the jaw which sent him stumbling around which allowed Diaz to follow up with a number of serious punches. Maynard stayed standing but it was clear that nobody was home. Seconds after the referee stopped the bout, Maynard tried walking off to his corner and fell to the ground. This is Diaz’s eleventh bonus.