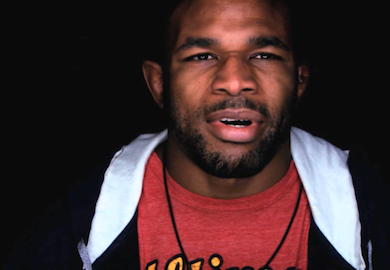 I think it’s safe to say that most of us men have experienced a low blow at least once in our lives.

Hard to really describe the pain and agony of such an event, unless of course, you’re TUF 17 competitor, Gilbert Smith, who seems to have no problem using his verbs and adjectives to create the proper visual.

In a recent interview with Steph Daniels of Bloodyelbow.com, Smith, breaks down his personal experience with the always excruciating low-blow.

“So this guy and me are wrestling, shoulder to shoulder, and he shot in. He was supposed to hit my sternum, but instead, his head went straight into my crotch at full speed, heavy impact. It was a perfect shot at the perfect angle.

I’ve been hit in the groin before, and it’s not fun, but this pain, was something I’ve never felt before. I don’t like getting overly graphic, but there’s really no other way to describe that feeling. It felt like my penis went into my body and out my butthole. My butthole was actually hurting from that shot. I felt like somebody had just violated me from the wrong end. I couldn’t understand what happened. I got hit in the groin and my booty hole was hurting. It was the worst pain ever, and I was grabbing both ends. Ever since that day, if I don’t have a cup, I don’t wrestle.”

Gilbert is set to return to action tonight at MFC 39.