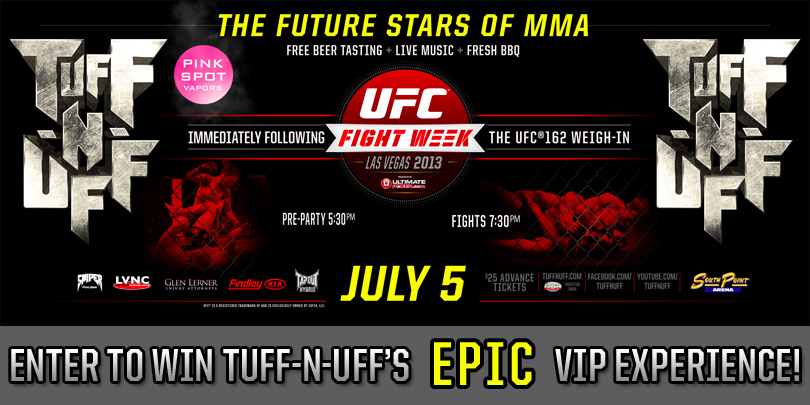 “The UFC has always featured the very best professional MMA fighters on the planet, and we’ve always strived to do the same at the amateur level,” Tuff-N-Uff president Barry Meyer said. “For us to now be joining forces for a project as incredible as UFC Fight Week is an amazing accomplishment. We know fans from all over the world will be in Las Vegas to see Anderson Silva face Chris Weidman at UFC 162, and we hope they’ll make the five-minute drive to South Point Arena to check out the best amateur talent in the country – truly the future stars of MMA.

The “Festibrawl” pre-party, which includes food, drinks and live music, starts at 5:30 p.m., just moments after the conclusion of the official weigh-ins for “UFC 162: Silva vs. Weidman.” UFC contenders Travis Browne, Clay Guida and Erik Perez will be on hand to sign autographs, and the first Tuff-N-Uff fight is at 7:30 p.m.

The “Tuff-N-Uff: Festibrawl” features an incredible six championship bouts, including a long-awaited grudge match between current Tuff-N-Uff lightweight champion Shane “Biggs” Johnson (7-2-1) and former title holder Jake “Rorshach” Swinney (7-2). The two lightweights were once training partners but have openly feuded since Johnson left his former home at Xtreme Couture. Swinney relinquished the title in 2012 as he looked to turn pro, but an injury slowed those plans. Now he’s hoping to win back the title he never actually lost and silence a critic in the process. Meanwhile, champ Johnson is unbeaten in his past seven fights and has defended his belt twice during the impressive run.

In additional championship action, undefeated middleweight titleholder Dylan Jahrling (5-0) puts his perfect record on the line against former light heavyweight champ Khalil “The War Horse” Rountree (5-1). House of RYU’s Jahrling has finished four of his five opponents in the very first round, but he now meets Wanderlei Silva product Rountree, who needed just 49 seconds to earn a win in his first fight at 185 pounds. Both are explosive finishers, and the fight seems certain to deliver fireworks fitting of the Fourth of July weekend.

In addition to the night’s headlining contests, a full lineup of aspiring amateur fighters from some of the world’s top academies – including 10th Planet, House of Ryu, One Kick Nick, Syndicate MMA, TapouT, UFC Gym, Wand Fight Team and Xtreme Couture – will compete at Tuff-N-Uff’s July 5 “Festibrawl.” Tickets for the event, which start at just $25, are available by calling the South Point Arena Box Office at (702) 797-8055 or online at SouthPointArena.com.

Pink Spot Vapors presents Tuff-N-Uff, brought to you by Findlay Kia, Glen Lerner Attorneys, Las Vegas Nutrition Center and TapouT Hybrid. UFC contenders available for signing are subject to change. The full fight card is available for viewing at TuffNUff.com. Like us on Facebook at www.facebook.com/tuffnuff. Follow us on Twitter at @tuffnuff.