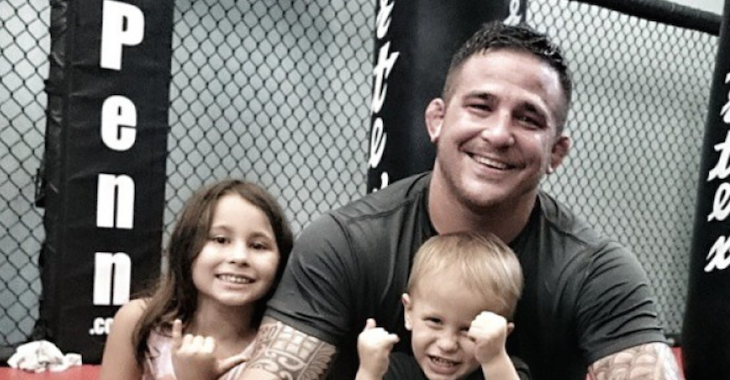 The Ultimate Fighter 6 alum and former UFC fighter Troy ‘Rude Boy’ Mandaloniz has suffered a serious head injury while working on his day job. For several days “The Rude One” fought for his life inside Hawaii hospitals.

The Hawaiian fighter fell off a very high ladder, which resulted in his injuries.

Troy was a fan favorite on the sixth season on TUF Matt Hughes vs. Matt Serra and fought two fights in the UFC. He also trained the likes of Kendall Grove during his UFC stint, and BJ Penn towards the end of his career.

‘Aloha Friends and family of Troy “Rude Boy” Mandaloniz. As some of you may have heard, Troy was injured quite seriously on june 5. He was not injured doing something that he loved like MMA or Cowboying up at a Rodeo. Troy was injured doing what he needed to do to provide for his family. He was working humbly and bravely on an extremely tall ladder when his world and that of his family came crashing down. Troy suffered fractures not only to his head, but also his right arm which he tried to brace with. This saved his life undoubtedly, but has left him with a long and expensive recovery.
After the fall, Troy was rushed to the Hospital where he was immediately flown to the intensive care unit at Queens medical center in Honolulu. Troy spent roughly 4 days in Critical Condition going in and out of Coma as he fought for his life. Troys wife Adria has been with him since the beginning, but his 2 beautiful children remain here on the Big Island with family.
The purpose of this campaign is to help the family re-unite on Oahu as soon as possible. It is also inevitable that the medical bills and general expenses will mount to a dizzying level. As You can imagine this is the last thing that this family needs to be stressed about right now. This is why I ask humbly for your support of this family. Let’s shower them with love and prayers and if you have the means, financial support would be so humbly and greatly appreciated. Mahalo for your support! Much love, The extended Mandaloniz ohana’

If you’re looking to help out his family, you can go to the link below and donate whatever you can. Thank you Penn Nation!!