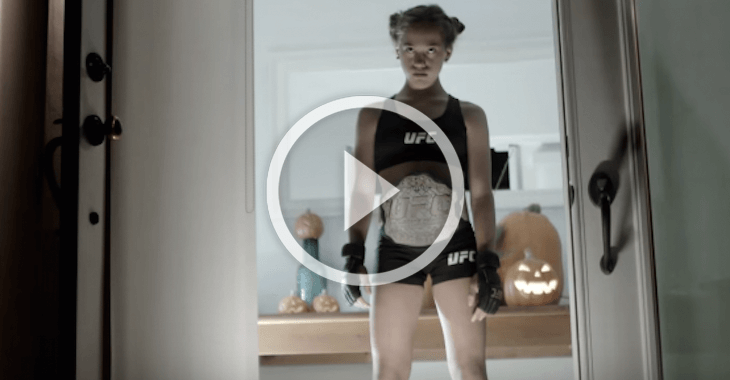 Ronda Rousey is getting ready to defend her UFC Women’s Bantamweight Championship against Holly Holm at UFC 193 and with Halloween fast approaching, fans of all ages are dressing up like their favorite fighters!

Whether it’s a grown man in Ireland dressing up like Conor McGregor or a young woman mimicking Ronda Rousey, the Ultimate Fighting Championship is creating role models left and right. The latest “UFC 193” commercial pokes fun a famous monsters of yesteryear as they go trick or treating and run into a REAL monster… Ronda Rousey!

The real “Rowdy” Rousey will be stepping into the octagon with Holly Holm at “UFC 193” on November 14th in Melbourne, Australia. The championship opportunity was unexpected for fans, but Holm claims she is ready to pick up the upset victory and ruin bookies’ nights! Who do you think will be walking out on top? Share your thoughts and make your predictions in the comment section below!