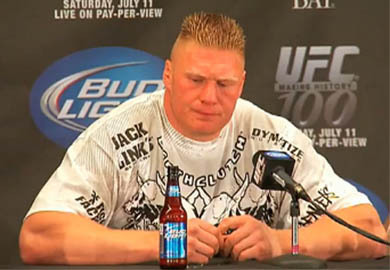 “I think mentally, the diverticulitis, that was the big thing [that led to his retirement]… If he came back and he was 100-percent mentally in the game, knowing that he could take whatever it meant to take, he could push himself, he could get hit, he could whatever – that was the big thing. When he was mentally on, I mean, literally, like his moniker when he was a college wrestler, he was like a freight train. He just was going to go through anything. If he came back and he was mentally 100-percent there, I believe physically he still has the gifts and he still has the ability to improve and to grow, but it’s like anything. The game is such a mental thing that once that chink in the armor was there and that kind of embedded itself in his head, I think that was really the point where it was tough for him.”

“If he came back and he really wanted to train and really wanted to do it and his heart was in it, it would be great. He was a pleasure to work with because he was a real professional. You talk about a professional in training, Brock Lesnar’s a huge professional. When training starts at 10 o’clock, that means 10 o’clock wrapped, ready and warming up. … The other thing with Brock is he would pay his training partners just like boxers pay people to come in, and he would basically say, ‘You’re like an employee now; you have to be here. This is a professional thing, and if you don’t, I’ll just let you go.’ He really does train like a professional. … If his mind’s into it and he really wants to do it, it’d be great.”

In a recent interview with Sherdog.com, Brock Lesnar’s head MMA Trainer discussed the rise and fall of Lesnar and the possibility that the former champ could return to form.

Would you like to see Brock return to the cage?