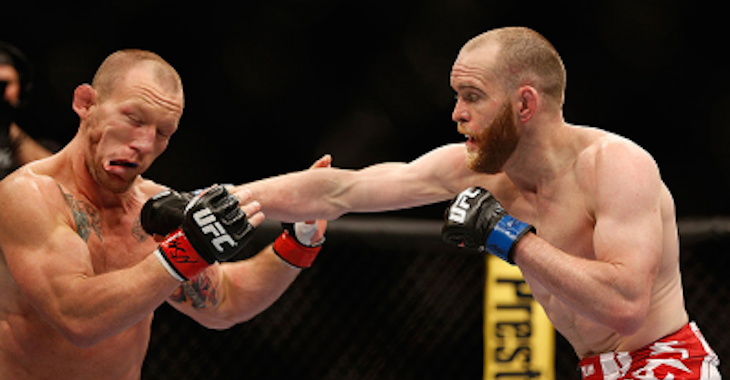 This UFC lightweight, once ranked as the number one contender, has stepped out of the cage and into the mine.

T.J. Grant has been out of competition since 2013, after suffering a concussion during training. He was scheduled to fight Benson Henderson, the champion at the time, but pulled out because of the injury.

Grant was supposed to come back in Fall of last year, but still had lingering symptoms from the blow to his head. Now, in order to provide for his family, he has taken a job as a miner.

Here’s what he told the Regina Leader-Post:

“To be honest I haven’t really worked a regular job since maybe 2005. Basically, I’ve gotta make a living. When you’re injured it’s one of those sports where you can live off what you made for a little bit, but we don’t make that much money so you have to go on to other things.”

“In my opinion I’m not done fighting. I feel 100 percent healthy. It’s just there’s a little bit of hesitation as far as returning to competition. In my heart I want to do it but I’m trying to be smart. I want to make the best decisions I can and make some money while doing it.”

“When you’ve been through what I’ve been through you have to really take your time and come up with a battle plan. I also know that, in fighting, there are no guarantees. I have a life to live, I have a mortgage to pay, I have bills. Do I stop working, live off my credit in order to fight when I could get injured? There’s a big risk-reward thing. I’m not ruling it out. I definitely love fighting. I want to do it but why not take a little break and let the rest of the world catch up?”