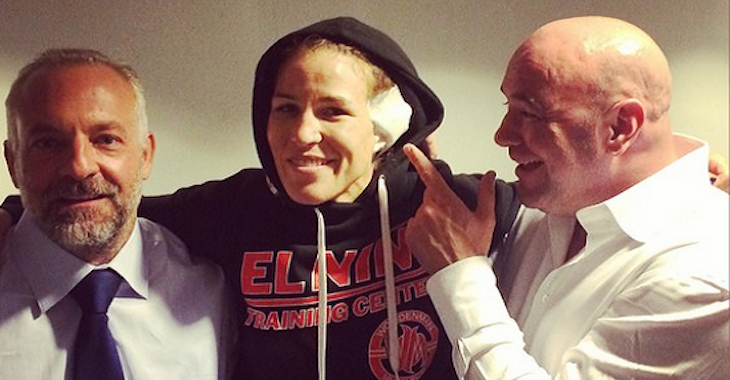 Toward the end of 2014, the UFC claimed they made a monumental deal for the development of mixed martial arts when they struck an exclusive sponsorship deal with athletic company Reebok. The partnership would lead to Reebok being represented by every fighter on the roster on their way to, and inside of the octagon. Gone are the days of “Dynamic Fastener” being represented inside the cage.

Fighters are starting to be vocal about their stance on the deal… good and bad. Leslie Smith is the latest fighter to speak out about the deal, and it will be hurting her pockets once it begins.

“It’s hurting me,” Smith confessed. “If it brings about more mainstream coverage and a union, and higher fighter pay and everything else that would benefit the fighter— But I haven’t seen any of that yet. At this point, I know that my cap for sponsorship stuff is $2,500 which is not so hot.

Smith, overall, is happy with the pay she is receiving from the UFC. The big show has paid her more in one year than she has ever received from fighting, but she thinks the fighters could be making a little more than they are.

“I made more money last year fighting for the UFC than I ever have in my entire life. So in a way, I’m like, you know, I wouldn’t want to be down on that because I really appreciate the opportunity,” Smith said. “But, at the same time, I also do see what the gates are bringing in and what the pay-per-views are bringing in and I’m hearing the stories. The fighters aren’t getting paid the percentage of the whole game which is a LOT of money. That’d be a wonderful thing to see change.”

Smith proceeded to break down exactly how much she would walk away from fight night with if she were getting paid $10,000 for her bout.

“I pay out everybody else, by the end of having my celebratory dinner I’ve got MAYBE $3,000 left,” Smith admitted. “Then I’m like, ‘Okay, how am I going to make this work for the next three months?’ assuming that I even GET a fight to work towards in three months.”

Do you think fighters should be getting paid more money? Should they be happy with what they are getting? Share your thoughts in the comment section below!