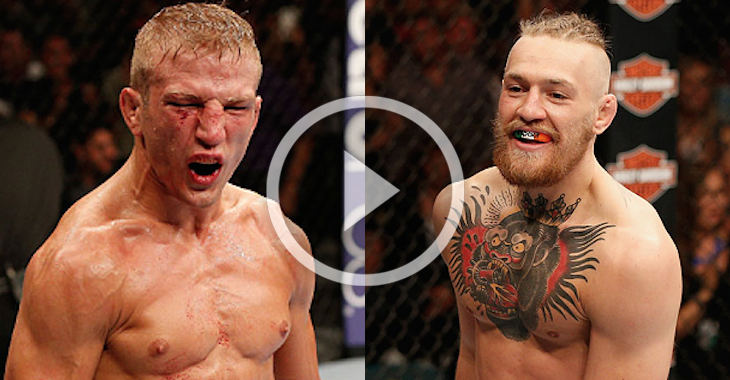 Are you ready for another super-fight?

On July 25, 2015, TJ Dillashaw will be looking to prove to the world that his victory over Renan Barao at UFC 173 was no fluke. If Dillashaw defends his UFC Bantamweight Championship like he plans to, he wants to square off with Conor McGregor next.

“That’s a fight I would love to have,” Dillashaw said while on Team Alpha Male’s “Stud Show Radio.

Conor McGregor defeated Team Alpha Male’s Chad Mendes in the conclusion of UFC 189 and established his spot as the top featherweight in the division alongside Jose Aldo. McGregor utilized body kicks and range to take home the gold. Dillashaw was impressed with McGregor’s performance, but he thinks he has what it takes to pick him apart.

“After watching Chad fight him, you know— props to McGregor and winning the fight. He looked strong. He looked good. You know, he’s a big 145 pounder but that’s a fight I can win, man. I’ve seen what Chad got to do to him,” Dillashaw said. “I’m in there with the cardio that I have and the standup angles I got and be able to use my wrestling to my advantage. I mean, I don’t think McGregor’s got much off his back. He didn’t show much improvement on the ground. He laid flat. I think it’s a fight I could definitely win and I would love, LOVE to have it.”

McGregor changes levels so often it keeps his opponent’s guessing what’s coming next, but Dillashaw believes he has the right stuff to dispose of McGregor. “The way I’m going to beat him is by how well-rounded I am. I feel like my stand up is just as good as [his]. I’m faster than he is. You know, he is bigger than me. He’s got the reach. But, my speed— I don’t think he’s going to be able to keep up.”

Dillashaw was quick to remind the listeners that he is in no way ignoring the challenge he has in front of him at UFC on FOX 16. “I gotta worry about one fight at a time. I got a big feat ahead of me. I’m going to dominate [Renan Barao]. Prove my worth and show everyone I’m a dominant champion and I would love that fight, man. That’s something that could build my name huge. Why wouldn’t I look for that fight, especially when I know that I can beat him?”

Is this a fight you would want to see? Who would win? Share your thoughts in the comment section below!