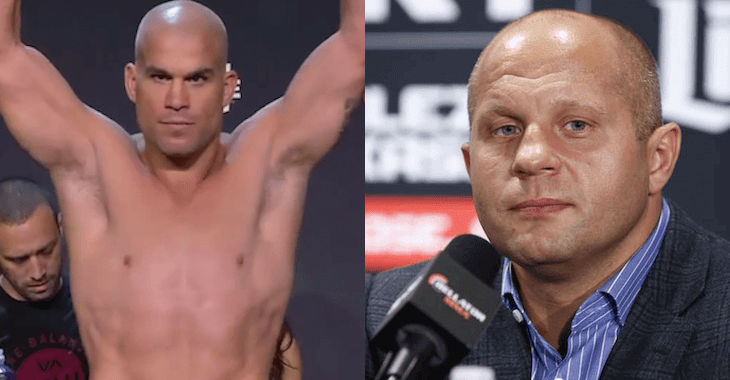 Fedor Emelianenko shocked the world when he announced his return to mixed martial arts earlier this year. Unfortunately for fans who wanted to see him in the octagon, “The Last Emperor” chose not to sign with an American based company like the UFC or Bellator.

Instead, Emelianenko chose to ink a deal with an upstart promotion based out of Japan started by one of the men behind PRIDE in Nobuyuki Sakakibara. Sakakibara revealed the fight will take place on New Year’s Eve, but remained quiet on other details surrounding the fight such as a potential opponent or which weight class Emelianenko would be fighting in.

Rumors have been circulating as to which fighter would be stepping into the ring with Fedor on December 31st and it looks like we can cross Tito Ortiz off that list. When asked by Submission Radio if he will be fighting Fedor, Ortiz gave a straight answer. “Not on New Year’s Eve, no,” Ortiz said. “I would love to. I just gotta go in and get some little, light surgical work done, I guess you could say. I gotta go get a bone shaved down. So I’ll be healed by next year.”

Ortiz’s last performance in the Bellator cage was at DYNAMITE when he was submitted by Liam McGeary in a battle for the light heavyweight championship. Now, Ortiz plans to kick back and relax during his New Year’s Eve.

“New Years Eve, I’ll be having a cold beer in my hand, saying “happy new year’s” to my family, instead of going out and trying to kill somebody,” Ortiz mentioned. “It sound a lot funner to me (laugh). I’ve been putting a lot of work in over a last few years, so I think it’s time to take a little break.”

Who do you think should face Fedor in Japan? Share your pick in the comment section below!