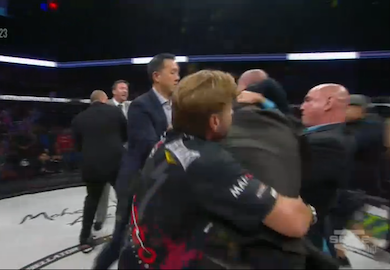 In between fights at tonight’s “Bellator 123” event, Bellator President Scott Coker announced that on Saturday November 15th, MMA Hall of Famers Tito Ortiz and Stephan Bonnar will duke it out in Bellator!

Bonnar and Ortiz met in the middle of the cage and Bonnar was given an open microphone and proceeded to tear Ortiz a new one. “It amazes me how many of his old friends, coaches, training partners, managers have come out of the wood-works to help me becuase they want to see him get his ass kicked!” Bonnar continued, “I cannot wait to eat his elbows and punches to be covered in blood so I can laugh at him, spit in his face and kick his ass… All I gotta say is poor Jenna. I don’t know how she put up with you all those years.”

When Tito Ortiz was handed the microphone, he was short with his words. “When you talk bout my family and fans, this shit gets personal! A punk ass kid like you?” Ortiz let go of the microphone and proceeded to lunge at Bonnar!

Officials quickly separated the two before any shots were landed and Ortiz quickly left the cage.