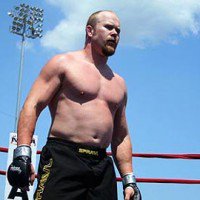 Boetsch was originally slated to fight Michael Bisping at the upcoming UFC 149 card but the injury bug hit and shook up the middleweight division leaving Boetsch and Lombard without their previously scheduled opponents, forcing the two into competition with one another.

Lombard is widely regarded as one of the best fighters in the world and with a 31-2 record, the former Bellator champ will be looking to make a statement and one day challenge Anderson Silva for the belt. Before the title picture at 185 becomes anymore convoluted, however, Lombard will face stiff competition as he fights “The Barbarian” in what will be an exciting fight.

“He’s coming from Bellator, but he’s been promised big things over here,” Boetsch said. “Since he has accepted this fight, there’s rumors that he’d be next to get the title shot. Obviously that’s rattling around in my mind: Will I be given the same opportunity if I take him out? There’s a lot of good things about this fight for me.”

Both middleweights have shown grappling prowess but Boetsch told Sherdog that he won’t shy away from wrapping up with the judo Olympian:

“He’s obviously a judo Olympian, so he’s got to be decent, but that just makes me want to throw him even more,” Boetsch said. “That’s what I’m going to try to do.”

As for the tough nature of fighting the highly touted (and favorite) Lombard, Boetsch remains in character and says he’s ready for Lombard to try and kill him:

“These are the fights that I really enjoy,” he said. “My teammates, we spar hard and we beat the crap out of each other, but at the end of the day, they’re all really nice guys. We have similar personalities and what not, so it’s hard to really turn it on and put it on those types of people and even some of my opponents in the past. … But with a guy like Hector Lombard, it’s easy. He makes the fight easy. You know he’s coming in there to try to kill you. You better be doing the same to him if you want to make it out of there alive.”

For more MMA and UFC 149 news, stay tuned to BJPenn.com.