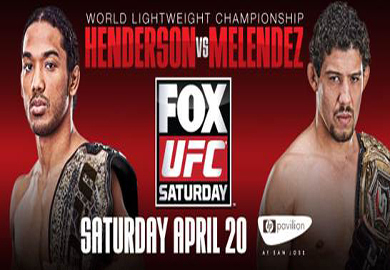 UFC lightweight champion Benson Henderson will defend his title in a long-awaited showdown with Gilbert Melendez, the last man to hold the Strikeforce® lightweight title, on Saturday, April 20 when the Ultimate Fighting Championship brings the Octagon back to HP Pavilion in San Jose, Calif.

The 29-year-old Henderson is 6-0 in the UFC, including two consecutive title defenses over Nate Diaz and Frankie Edgar. He’ll look to cement his status as the world’s best 155-pounder when he meets Melendez, a San Francisco resident riding a seven-fight winning streak.

“Benson Henderson wants to beat Gilbert Melendez to prove once and for all that he’s the best lightweight in the world,” UFC President Dana White said. “Gilbert was a champion in Strikeforce and he’s been on an incredible tear. Benson wants this fight badly and I’m excited that it’s headlining such a stacked card.”

UFC Fight Club members will have the opportunity to purchase tickets to this event Wednesday, Feb. 13 at 10 a.m. PT via the website www.ufcfightclub.com. A special Internet ticket pre-sale will be available to UFC newsletter subscribers Thursday, Feb. 14, starting at 10 a.m. PT. To access this presale, users must register for the UFC newsletter through UFC.com.