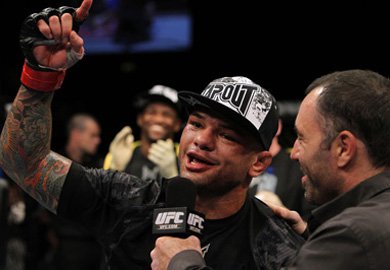 After more than a year on the side-lines, former UFC welterweight title challenger, Thiago Alves is set to return to action this summer in Boston against the fast rising Matt Brown.

The bout serves as the first official booking for the UFC’s debut on the new Fox station, Fox Sports 1, which UFC president Dana White has promised fans and the media to be” the best television card” the promotion has ever done.

The yet to be named event is set to take place at the TD Bank Garden on August 17, the same day FOX’s new network will launch.

Matt Brown, as of late, has made a career out of entertaining fans on the FOX main cards. He brings into the bout a five-fight winning streak, the most recent of which came during UFC on FOX 7 where he stopped Jordan Mein in the second round via TKO.

Alves hasn’t seen the inside of a cage since his March, 2012 loss to Martin Kampmann. He has since been dealing with injury and rehab.