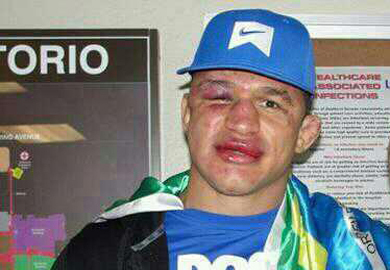 It takes a lot to be a UFC champion, few people are ever able to accomplish the task of becoming a world champion. However for each champion, there has always been a rival. Frank Mir to Brock Lesnar, Chael Sonnen to Anderson Silva, Tito Ortiz to Chuck Liddell and so on. Many fighters come close to winning a world championship by clearing out their division, but come up short against the champ. These fighters are reffered to as gatekeepers. They can defeat nearly every fighter in their weight class, but lose to the champion. When a fighter beats a gatekeeper, then they are ready to take on the champ. Below are the top 3 gatekeepers in the UFC.

Junior Dos Santos – Heavyweight: Junior Dos Santos, also known as Cigano, is 16-3 in his professional Mixed Martial Arts career, and 2 of those losses have come at the hands of heavyweight kingpin, Cain Velasquez. JDS defeated Cain Velasquez in 2011 via first round KO. After that, Cigano defeated Frank Mir by TKO. In the meantime Cain Velasquez had disposed of Antonio Bigfoot Silva in one of the bloodiest fights in UFC history, earning him a shot at Dos Santos. In their second meeting, Velasquez put on a fantastic performance, dominating Cigano for all five rounds. Dos Santos went back to the drawing board and defeated Mark Hunt via spinning heel kick KO, earning him a shot to redeem himself. The third meeting between Dos Santos and Velasquez went much like the second, with Velasquez dominating the fight from bell to bell every round.

Urijah Faber – Bantamweight: Urijah Faber is a Mixed Martial Arts veteran, with a 30-7 professional MMA record and with 25 of those wins coming by stoppage, Faber is not to be taken lightly. However all 7 of his losses are in title fights, and 3 of them are for the UFC title. After losing an interim championship bout against Renan Barao in 2012, Faber went on a 4-0 run in 2013, including a dominant win over Michael McDonald to earn the #1 contender spot. So when Dominick Cruz pulled out of his comeback fight against Renan Barao, it was Faber who got the nod to fight against Barao. However Faber came up short and lost the fight via controversial KO in the first round. With how Faber looked against top level opponents in 2013, it doesn’t look like anyone in the 135 pound division can beat him besides Renan Barao, making him the bantamweight gatekeeper.

Miesha Tate – womens bantamweight: Ronda Rousey is the first womens UFC champion, making Miesha Tate the first womens UFC gatekeeper. Tate originally lost to Rousey in March of 2012 for the womens Strikeforce title. She bounced back to defeat Julie Kedzie that same year before losing her UFC debut against Cat Zingano. With the win, Zingano was poised for a shot at Rousey’s title after coaching against her on the Ultimate Fighter. However when Zingano had to pull out due to injury, it was Tate who stepped up to coach against Rousey in a heated season. In their second meeting everyone was excited to see if Tate would avenge her loss to Rousey. She lost via 3rd round armbar after being dominated until that point. After being dominated by the champ in both of their meetings, it looks like Tate will have some ways to go before earning a third shot at Rousey.