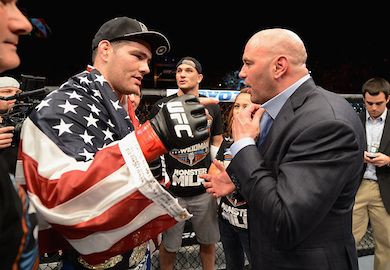 “The sky’s the limit for him. He’s the first guy I’ve ever seen so proud to be American… He comes off really well in every way, shape and form. The respect he showed Anderson (Silva), he’s like, ‘I love being aligned with Anderson Silva. He’s the greatest ever and he deserves that respect.’ It’s good stuff. This was an important one – this was big for him. Everybody had to be thinking the same thing I was thinking. ‘How is he going to get to Machida? How is he going to cut off the ring? How is he going to do this? He has a very deceptive style and everybody knows now Weidman’s the man. He looked good tonight, and that was his first five-round fight. He’s only getting better, just like Ronda (Rousey). Scary… He’s undefeated, he’s beat Anderson Silva twice, and Machida, and this is the first time he’s ever gone five rounds. [It’s] his second title defense and he’s 12-0. Wow, that is impressive.”