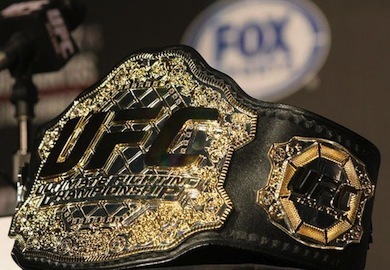 There once was a time where the UFC consisted of a tournament in which men fought several times in a single day, with a win advancing you to the next round and a loss sending you packing. With each win, you came one step closer to fighting for the grand prize in the form of an oversized check (for $50,000), a trophy, and recognition as the best fighter with the best technique.

Over the years the UFC faced political outrage and opposition from some of the most powerful men in the country and as they applied more pressure, the UFC was molded into a new sport entirely.

Now, 20 years since the first UFC event, the company is a huge, international organization that stretches its glove-clad reach to the corners of the Earth.

Nick Diaz was the top contender some time ago back at UFC 137, a card that was tossed around and beaten down until the main and co-main events were unrecognizable as a game of musical press-conference chairs removed Diaz from a title fight and into a fight with B.J. Penn, one that would later serve as the main event after welterweight champion Georges St. Pierre was injured and forced to withdraw from the card. Diaz won that fight and went on to fight in a losing effort against Carlos Condit for the interim-welterweight title fight last February. Diaz will be coming back from over a year layoff to fight one of the most dominant champions of our time in a fight that he simply gave up the first time around. That doesn’t mean that he is in for a sure loss but with a loss, the detractors will be satisfied in knowing that he never ‘deserved’ the shot, no matter how far they have to reach to come to that conclusion.

This is simply a tactic to pull up the numbers for an event while giving fans a fight that had once been promised but has since fallen out. Even with a champion who draws some of the highest PPV numbers on a consistent basis and also with a separate challenger in Johny Hendricks who has been dynamite as of late scoring a pair of first round knockouts over top competitors and in out-pointing Josh Koscheck. Instead Hendricks will fight on the same card without the promise of a title shot with a win no matter how emphatic, against a champion who opted not to fight him for now.

You can’t fully blame the UFC for doing this. They are a business and the point of running a business is to make money and bee successful. But they have to remember that not only are they in the customer service business, but they are also responsible for making their employees happy. Those employees don’t have much say at the end of the day but a happy fighter is one that you don’t have to worry about leaving or running into contractual issues.

Next, we have the former lightweight champion, Frankie Edgar who drops down to what many consider will become his new permanent home at 145, taking on current featherweight champion Jose Aldo in what has been dubbed by the UFC as a ‘Super Fight’ at UFC 156. While the fight is a fantastic matchup and Edgar may be walking around at a more natural weight, the fact that he earned a title shot in his featherweight debut puzzles me. Who knows how his body will react to even the slightest of weight cuts let alone fighting someone who has made the division their own in Aldo. Consecutive losses to Benson Henderson (regardless of how controversial they are) shouldn’t exactly warrant a title fight, especially in a new division. As for a challenger worthy of the shot, Erik Koch has twice been promised a title shot with Jose Aldo being forced to withdraw from both due to injury. All the while, Koch has been earning wins and currently rides into this Saturday’s UFC on FOX 6 show on a 4-fight win streak with three of those win coming by either submission or knockout. He will look to destroy Lamas to re-earn a title shot that has twice been pulled out from under him.

Finally, the ‘American Gangster’ Chael Sonnen gets a light-heavyweight fight against arguably the greatest fighter on the planet in Jon Jones. The 205-pound division is no stranger to Chael Sonnen as he used to call the division home. Now, after a middleweight campaign that saw him lose to Anderson Silva twice, Sonnen has been plunged into the deep, talent-rich, light-heavyweight division only to emerge on the surface as the number one contender. In this case, unlike, the first two, Sonnen was placed in this position to save the dying reality show, The Ultimate Fighter, as he coaches against Jon Jones leading up to a title fight in April at UFC 159.

With The Ultimate Fighter Season 16 bombing in the ratings with some week’s numbers dipping to around 640,00. Those consistent numbers were a mainstay for most of the season and continued to draw doubt towards a show in need of some fresh ideas. As for the finale, a 1.3 million viewer peak. Solid numbers for a card headlined by a heavyweight main event in what was an insecure, roller coaster season for ratings that isn’t preferable for a show that has such an abundance of seasons as TUF does.

Still, Sonnen hasn’t yet proved himself in a division where the champion holds several physical advantages over most in the UFC with a specialty in wrestling, which Sonnen has used multiple times to climb the middleweight ranks against opponents who lacked the raw talent that he possesses in the grappling department. Even if the reports of a lean, mean 240-pound Sonnen are true, that doesn’t mean he’s an instant success in a division where a large majority of the fighters walk around well into the heavyweight division limits.

Then you have the Vitor Belfort story. A man who has fought in several UFC title fights in his career and has explored several weight divisions. A September fight with Jon Jones served as a savior to a situation that desperately needed one as Belfort stepped up to fight the champion in a division that Belfort hadn’t visited since 2007. In that fight, we saw the closest thing to a legitimate Jones loss we had ever seen as an early armbar attempt damaged Jones arm (which wasn’t apparent until after the fight).

Next, Belfort was matched with Michael Bisping, with Bisping being the sole recipient of a title shot with a win and Belfort being forced to ‘clear out’ the division before getting another shot at the middleweight title. Belfort dominated the fight and knocked Bisping out with a brutal head-kick. After the fight Belfort called out Jones looking for a rematch and also the removal of ‘number one contender’ Chael Sonnen not only from his scheduled title fight but also from the UFC as Belfort felt that he was next in line in what would be considered ‘champion vs. champion’. Chael responded with an offer to arrange a meeting between the devout Christian, Vitor Belfort, and Jesus.

This seemed like a somewhat legitimate argument with Belfort having a glimpse of hope in the first round of the Jones fight and also with the destruction of Michael Bisping. However, the request would fall on understandably deaf ears as the UFC will ultimately stick its plan to help draw viewers to a highly-anticipated April title fight while also lifting viewer numbers for TUF. But even without the plan to save TUF, Belfort shouldn’t be calling out champions from other weight classes it convolutes what is already a tangled mess at the top of each division, even if Belfort knows that politics earn title fights.

Sure you just fought Jones but you were considered as a late replacement simply to salvage the main event. If you want another title fight, gain the weight, show your current worth in the light-heavyweight division and earn that shot with enough light-heavyweight experience in recent memory to warrant a title fight that arouses suspicion from none.

This is troubling to think that if (and when) the UFC becomes successful with these pre-planned fights, it can become the norm in that instead of earning title shots they will take a top-5 in a specific division and give them a title shot if thats what would draw ratings instead of letting fighters earn shots. Diaz, Edgar, and Sonnen all clearly lost their last fights two of which were rematches from previous losses to the same opponent. Let the former number one contenders have to earn their shots again instead of giving them an unofficial title of number-one contender for life because they can draw more viewers.

But the UFC will march along looking to make these super fights that fans want to see. And surely, I will be in front of my TV (and in attendance for Jones vs. Sonnen) during all three fights with my stomach rumbling from the nervous butterflies one gets when watching a live UFC event. The UFC will rake in money with each event and hopefully for the sake of argument, at least one of these champions is dethroned to prove that one of these challengers is worthy since coming off of a loss in their last fight even if that wasn’t the main intentions for the UFC putting these particular fights on besides a paycheck at the end of the day.