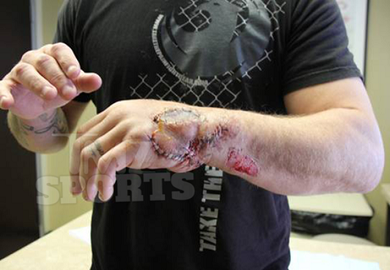 “This is what actually happened. One of my friends had cocked the gun at the gym. We had to get back to practice, so the gun’s safety was set and it was put back in my backpack. When I get home I always unload my gun and make sure there isn’t a round in the tube, but the gun was jammed and the round would not come out of the pistol. Now this is a pretty big gun, it’s a 1911 Sig Sauer .45, I’ve only run one clip through it, so it’s not beat up or anything, it’s a brand new gun.”

“So, I go to taking it apart, keep in mind I’m more or less a life-long gun owner, it’s not like I’m a novice. I was sitting down and putting together my UFC contract, putting the pages in order. I was watching The Bachelor (laughs) and I was eating blueberries, so I wasn’t fully concentrating on taking the gun apart like I should’ve been. So, when I took the gun apart the hammer was back, I had it on safety but for some reason my finger must’ve touched the trigger. The pistol was stuck so I had to pull on it in both directions with my hands. My hand was over the barrel, so the parts didn’t fall all over when I removed the slide. While I was trying to get the pistol apart it fired.”

“I got up for some reason I was running around the house like a fucking idiot, I was naked and with every heartbeat blood was spurting out of my leg. I must’ve been in shock because I actually sat on the couch thinking I could get it under control. As I sat there the blood was coming out of my leg with enough force to hit me in my face. It finally dawned on me that I had to wake my wife up, so I get up and open the door and I say, ‘Lisa wake up, I just shot myself call 911,’ and at that point I collapsed.”

In a recent interview with LastWordOnSports.com, Joe Riggs discussed his near fatal shooting. (More on that HERE)