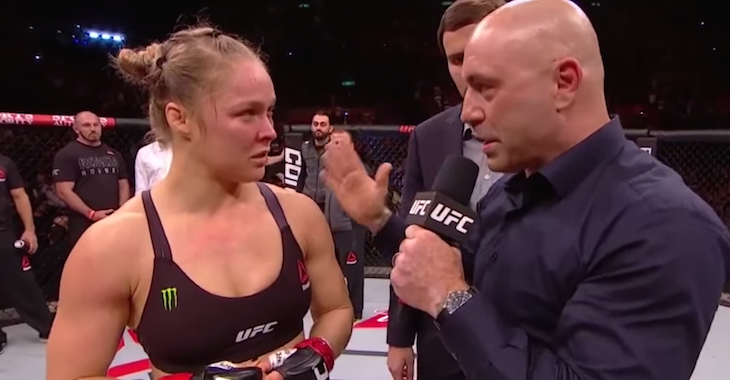 Emotions were running high in Brazil last night after the main-event of “UFC 190” concluded. Ronda Rousey had dished out another highlight-reel victory and proceeded to tear up after her win. During her post fight interview, she revealed she was going to dedicate her victory to the late “Rowdy” Roddy Piper and her father.

Joe Rogan was interviewing Rousey and you could hear his voice crack in the beginning. Whether it was because he had a frog in his throat or he was trying to keep emotions down, you could tell that there was something special going on in the octagon on Saturday night. Rogan late confessed on Twitter that he was close to crying while interviewing the UFC Women’s Bantamweight Champion:

That was the first time I ever almost cried while interviewing a fighter. @RondaRousey is something insanely special.

There is a revolution going on in the world of sports right now and mixed martial arts is lucky to have someone like Rousey as a role model for children everywhere. Everybody in that octagon was part of something special.