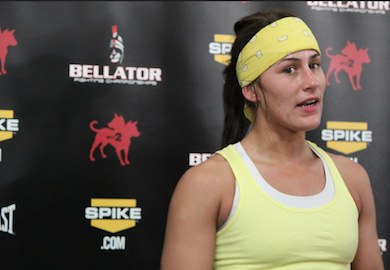 We learned last week that Eye was put on a probationary suspension for a drug testing failure following her decision victory (now overturned) over Sarah Kaufmann.

After early reports listed a blood thinner, BJPENN.COM learned today that she did in fact fail for cannabinoids, a compound found in marijuana.

The top bantamweight prospect is still set to square off with Alexis Davis at UFC 170 later this month and according to our sources, this incident will not prohibit her from getting a license to fight.

For the infraction, Eye was forced to pay a fine and will be required to pass a pre-fight drug test before her next bout.

No other terms of her probationary suspension were given at the time of this report.