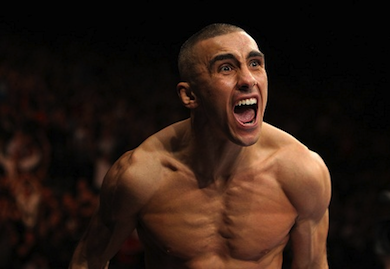 Submission ace Terry Etim will return to the cage on November 2nd as the Liverpool native will make his Bellator debut against Patrick Cenoble. The lightweight affair will be featured on Spike TV leading up to Bellator’s highly anticipated Pay-Per-View, which is headlined by MMA icons Rampage Jackson and Tito Ortiz.

“Rampage vs. Tito” will be held at Southern California’s Long Beach Arena on Saturday, November 2nd, with tickets on sale now. Tickets can be purchased on Bellator.com, Ticketmaster.com, as well as at The Long Beach Arena Box Office.

Only 27, Etim joins Bellator with an impressive 15-5 record to his name including 12 submission finishes in his young career. Etim holds notable victories over Matt Grice, Sam Stout and Brian Cobb and is looking to make his mark inside the Bellator cage.

“I’m excited to get back into the cage and do what I do best, fight,” Etim said. “Bellator has continued to grow and to be part of the organization and be part of the first PPV is a huge honor, and I’m pumped to be able to showcase my skills on such a big stage. November 2nd is going to be a huge night.”

Florida native Patrick Cenoble will look to get back to his winning ways on November 2nd after the quick finisher fought to a draw against veteran Tony Fryklund at Bellator 94. Just 23, Cenoble packs a powerful punch and plans to keep the fight on the feet on November 2nd from the Long Beach Arena.

The fight card for Bellator MMA’s inaugural Pay-Per-View is below. Additional fights will be announced in the coming weeks.