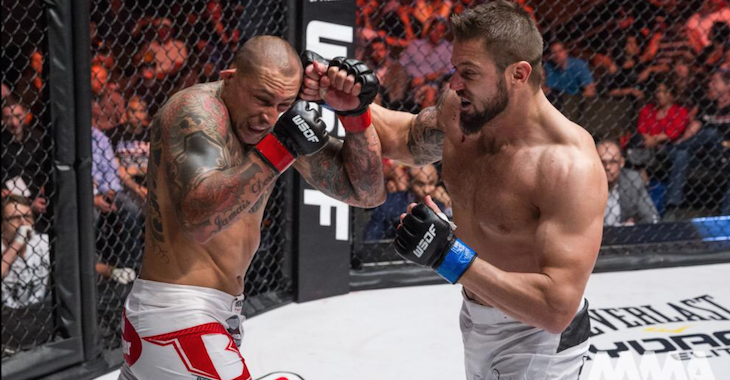 Last night at World Series of Fighting 19 Teddy Holder was scheduled to fight Jake Heun. By the end of the night he had knocked out former UFC fighter Thiago Silva.

Just hours before the fights started, Silva’s original opponent, Matt Hamill, pulled out due to illness. Holder was given the chance to step in and fight in the nights main event and boy did he deliver. Here’s what he had to say after the fight.

“Man, I’m excited. I’m holding it in right now — they’re saying I have to go to the hospital and get checked out — but all in all, man, I’m just jumping for joy inside right now. It was a big opportunity and I’m glad I seized the moment.”

“We were supposed to get over here at three o’clock today, and right at three o’clock (WSOF executive vice president) Ali (Abdel-Aziz) called me and said he had an opportunity for me. I called my manager, talked to my corner, who was actually downstairs getting food so I could get fueled up a little bit. We decided there’s nothing to lose. Go for it. I can knock out anybody in the world, so why not? So I just went in there. Screw it.”

Talk about seizing the moment.