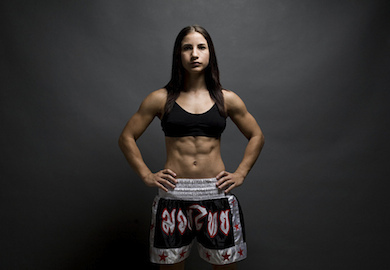 Last season was the premier of TUF 20, a groundbreaking season that would crown the UFC’s inaugural women’s strawweight champion. The first fight of the show was between #3 ranked Tecia Torres of Team Melendez, and #14 ranked Randa Markos of Team Pettis.

The injury didn’t occur during training however, it happened while the coaches were evaluating the women prior to picking teams. Team Pettis chose to put the women through a circuit of physical workouts, whereas Team Melendez chose to get to know the fighters personalities. She revealed on TUF Talk that the injury occurred while doing pullups for Team Pettis.

I actually got a little injured before the fights. First off, we didn’t really warm up. We had make-up on still and we went straight into training for that little physical assessment. So the last person (to do pull-ups) was JoJo (Joanne Calderwood) and she did 18 so of course I went out and did 20 and I pulled something in my back,”

“I knew I wanted to fight first and I ended up fighting first. With every fight, everyone goes through something, nobody is really 100-percent. I can’t say why that’s lost. It just sucks it happened like that.”