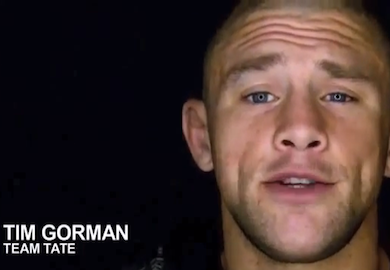 The Ultimate Fighter Season 18: Rousey vs. Tate series is full of personable characters all trying to vie for a shot in the UFC and a chance to earn the coveted TUF championship trophy and six-figure contract.

On that list of fighters is bantamweight prospect, Timmy Gorman.

In his first video blog, Gorman talks about his time on the show, his coach Miesha Tate and her boyfriend Bryan Caraway.