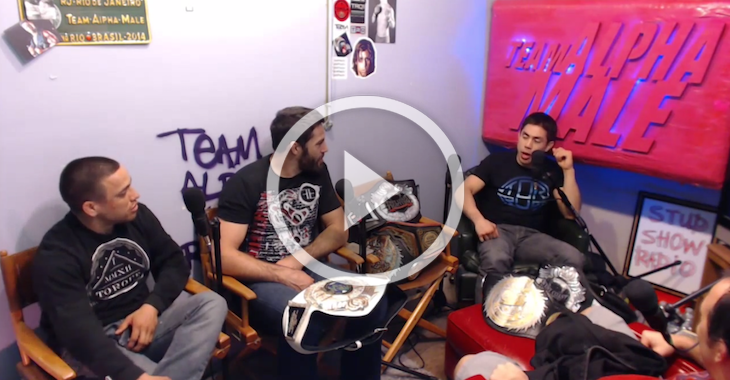 Both fighters fought this past weekend at the West Coast Fighting event, WFC 13. Sandoval fought in the night’s co-main event against Oscar Ramirez. Sandoval defeated Ramirez in the second round to become the first ever flyweight champion for the promotion. Sandoval talked about his fight and descried the ending, when he dropped Ramirez.

“Second round comes in, I’m feeling good already, so I’m faking it and faking it and I’ve been working on this overhand right that’s just nasty, I’ve been working on it for a while right. Anyways it just happened. I hit him with that overhand right and I just seen his eyes go back and his body rock. I’ve never felt that before or seen that before and I just said, ‘here I go, bow! Another one baby!’ It was pretty cool.”

In the night’s main event fight Team Alpha Male’s David Mitchell jumped up from the middleweight division to fight heavyweight champion Dave Huckaba on short notice. Going into the fight there was a lot of back and forth. So much so that threats were being made against Mitchell from those who supported Huckaba. It got a little crazy and Mitchell admits it was pretty intense. Mitchell defeated the champion in the second round via rear-naked choke. He talked about the talk prior to the fight

“Yeah it got a little over the top and at the end of the whole thing Huckaba said he’s got his demons and I just think it was a great fight because it kind of brought out the best and worst in me and him and kind of all humanity. At the end of the day he was very much–I think we were both a little apologetic for how over the top it got.”

“But it added up to a very emotional fight.”