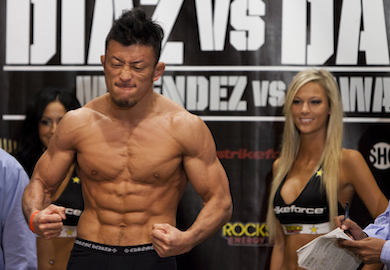 The UFC’s first trip to Singapore will bring with it the debut of fan favorite, Tatsuya Kawajiri (32-7-2) as he battles Hacran Dias (21-2-1). The bout was reported by Asian combat sports outlet, Fight Sport Asia.

Kawajiri has recently enjoyed a five-fight win streak with four of those wins coming in his new division, featherweight. Kawajiri dropped divisions two fights after being TKO’d by former Strikeforce lightweight champion Gilbert Melendez. Kawajiri has finished all but one of his previous five victories.

Dias will return to the Octagon for the third time, this time rebounding off his first UFC loss and second career loss. His last opponent was Nik Lentz in May.

UFC Fight Night 34 will take place on January 4th at the Marina Bay Sands resort in Marina Bay, Singapore. This bout will be accompanied by a welterweight clash as Jake Ellenberger is set to take on the last Strikeforce welterweight champion, Tarec Saffiedine.