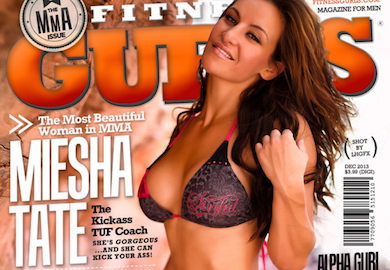 This Saturday Miesha ‘Cupcake’ Tate will finally get her chance to avenge her loss to Ronda Rousey. After coaching oppsite each other on season 18 of The Ultimate Fighter, Rousey and Tate will do battle this Saturday at the co-main event of UFC 168: Silva vs. Weidman.

As fans saw over the course of the season of Ultimate Fighter, there is no love between Rousey and Tate. Tate lost her first meeting with Rousey in March of 2012 and lost the Strikeorce Bantamweight title.

Tate spoke at an interview during the UFC 168 open workouts about Rousey’s mental edge in the first fight and how she has equalized that advatnage going into this fight.

“She had mental warfare in her arsenal the first time we fought, and I didn’t. It wasn’t a weapon on my tool belt, but it’s something that I learned the hard way. I learned a lot in that fight. Not only as a fighter, how to be more technically sound, but also how to grow and be more mature as a person. I just let go of those feelings of animosity. That was a choice on my part, and I’m happy right now. I’m right where I want to be.”

Tune in to the UFC 168: Silva vs. Weidman this Saturday on PPV to see if Tate will get her revenge.