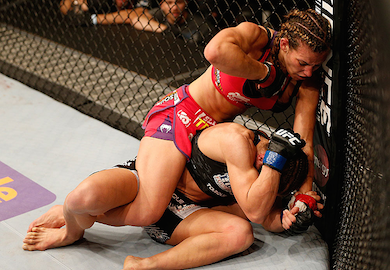 Following her first ever UFC win, former title challenger and TUF coach, Miesha Tate took to the UFC on FOX Sports 1 studio’s to talk about her last fight against Liz Carmouche and what the future holds for her.

Miesha Tate on getting her first win in the UFC against Liz Carmouche: “It feels really good to get the win. I started a little slow in that fight, picked it up and am glad I cleared that hurdle. Carmouche is really, really strong. Breaking that grip was like breaking Iron Man’s grip. She had it on lockdown.”

Tate on how she got the win: “There’s a term ‘lay and pray’ and there’s a term called ‘lay and stay’. She just ‘laid and stayed’. She’s a strong girl and tried to squeeze me to death. It was hard to move and getting to the feet was a little challenging, so I just tried to elbow her in the head. My coaches were trying to get me to do something. They said you have to go for broke. I knew going into the third round that it was close and that’s why I decided to turn it up.”

Tate on who she wants to fight next: “I have a list – all of the girls at 135. I’d love a fight against Gina Carano. She’s coming back and I don’t think she should go straight for the title. I also have my eyes on Holly Holm and Sarah Kaufman.”

Tate on if Carano could make weight at 135: “That’s the question. She’s a big girl and she has made 135 in the past. It’s been a long layoff. If she makes the return, she’s professional and I trust she’ll make the weight.”

Tate on men coaching the strawweight women on The Ultimate Fighter season 20:“I love Gilbert as a coach. His wife is a Muay Thai fighter who’s trying to transition into MMA at 115. I know he’s very pro women in MMA. I think Anthony Pettis makes an interesting coach. I think it’ll be different for the guys to coach so many girls in one setting, but I can’t wait for the season. I attended the tryouts and the talent pool is great.”

You can skip the reading and watch the interview below: