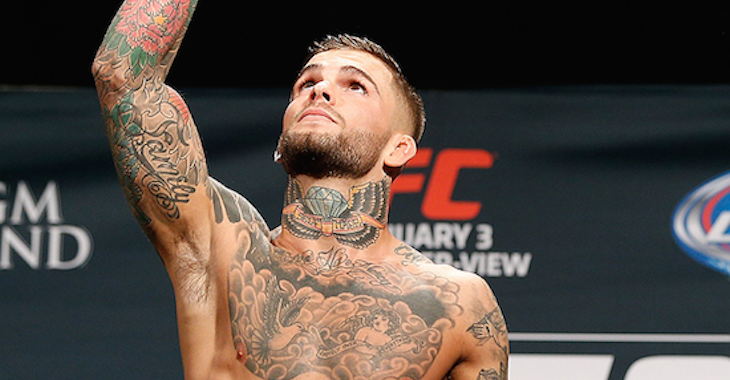 Fresh of the heels of TJ Dillashaw’s exit from Team Alpha Male,  one of the Sacramento based fight team’s top prospects , Cody “No Love” Garbrandt spoke up about the situation, and is looking at the bright side of the split, as it may lead to his own UFC title shot in the future.

He told The MMA Hour:

“It was his (Dillashaw’s) decision to leave, just like he could’ve stayed. It was a grown-man decision for him to leave. If we’re not good enough for you, then why are you going to come in the gym and train with us then go out to Colorado and do your training there? I think he was playing the victim, and it’s like, we’re all tight with him, it’s cool, (but) it’s just making it harder. Do you want to stay with us or do you want to be out there? You can’t be in-between.”

“I talked to TJ before, and I said, ‘I wish you nothing but the best, but when and if we come down to fight, I’m going to look forward to it. You’re the world champion. You have what we all want…We’re going to be fighting each other. There are possible matchups, (so) why would you be in here watching and working with each other when you’ve already announced that you’re leaving and going to Denver and you have your coach out there?”

“For me, it opens a lot of doors. He’s a champion, and I’m on my own journey. I want to get a title run going, whoever’s next for me, and get in that spot. That’s why I got in this sport. I wanted to be a world champion since I was 13 – long before I knew who TJ Dillashaw was.”

In short, it doesn’t seem like the TAM guys are losing much sleep over the split, seems like the opposite actually.