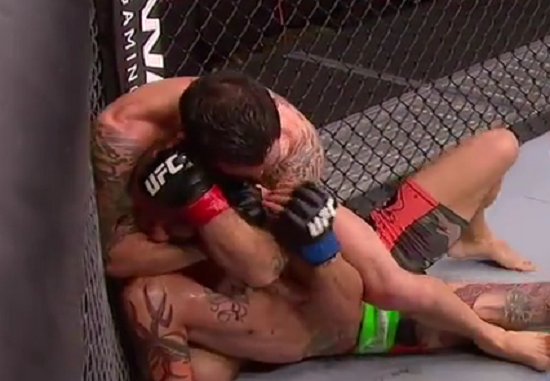 Last night in the main event of UFC Fight Night 57 Cub Swanson was submitted by Frankie Edgar with just 4 seconds before the end of the bout.

The choke that finished the bout was a rear-naked choke that wasn’t under the chin of Swanson, which usually doesn’t force a fighter to tap. However, Swanson did. He spoke at the FOX Sports 1 post-fight show about the neck crank that made him tap.

“I took a lot of elbows on my jaw, so my jaw was pretty tired. When I kept turning, turning, turning I was like, ‘He is not going to finish me.’ Then my mouth was open, and he cranked my jaw pretty hard. I don’t want a broken jaw again. I’ve already lived through that, so, oh well.”

“If you want to be the best, sometimes you get the raw end of the deal. That’s life.”