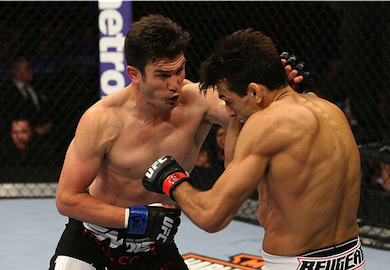 This Wednesday on FOX Sports 1, the ‘TUF Nations Finale Prelims’ headliner between Sam Stout and KJ Noons has been changed to a welterweight bout.

The two fighters were originally contracted to fight in the UFC’s 155 pound division.

UFC.com broke the news this afternoon with the following release:

The lightweight bout originally scheduled between Sam Stout and KJ Noons for UFC Fight Night: Bisping vs. Kennedy has been changed to a welterweight contest. The fighters approached the UFC to request the change in weight class, and it was subsequently approved by both the UFC and the Quebec athletic commission, the Régie des alcools, des courses et des jeux.