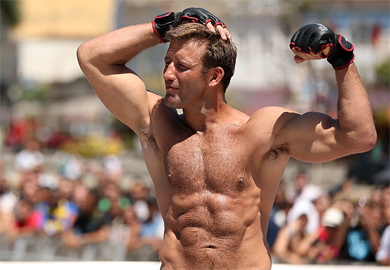 UFC light heavyweight Stephan Bonnar has been suspended for one year after testing positive for steroids for the second time in his career.

According to Marc Ratner, the UFC’s VP of regulatory affairs, Bonnar will be suspended until October 13, 2013. This after the “American Psycho” tested positive for the anabolic steroid Drostanolone following his loss to Anderson Silva at last months UFC 153.

Bonnar was suspended for nine months by the NSAC following his UFC 62 loss to Forrest Girffin in 2006 after metabolites of the anabolic steroid Boldenone were found in his system. Stephan announced his retirement from the sport after an 11-year run, this prior to the news of his positive drug test came out.

“We feel very strongly that there’s a big difference between PED’s [performance-enhancing drugs] and marijuana,” Ratner said. “We think the commissions do a good job with PEDs, but we think with marijuana there should be some form of rehab involved, going through that kind of process and learning about it.

“Other sports have a difference between PEDs and recreational drugs.”

Ratner said he expects Herman to be suspended for “months,” while also having to go through some kind of rehab program.

Earlier this year, the Nevada State Athletic Commission suspended Nick Diaz for a year after he tested positive for marijuana metabolites a second time.

Neither Bonnar or Herman have publicly commented on their positive drug tests since the news was first reported last week.