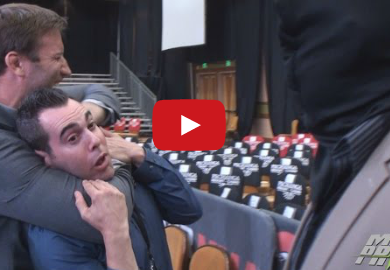 Aaron Tru was in the process of interviewing Stephan Bonnar on video about his upcoming fight with Tito Ortiz, when he suddenly found himself caught in a standing rear naked choke.

Tru posted the following message on The UnderGround, promising that this was in no way staged.

I just want to say this was not planned and I was not in on anything. Weirdest interview of my life. It’s obvious why they call him American Psycho now. In probably the most bizarre interview of my life, Aaron Tru and Adrian Gallegos of MMAprime.tv speak to The “American Psycho” Stephan Bonnar and Justin McCully, who is wearing a spit mask or mask or some sorts. It didn’t take much more than the mere mention of Bonnar’s Opponent Tito Ortiz to set the “American Psycho “off. We were on the way home after the media scrum and had already packed away the mics and light. We saw Bonnar and McCully near the cage, where security was ushering people out (you can see him in the video) and I had to go get a sound byte.

I know that I have pulled stunts in the past, but I assure you, this was 100 percent not planned, pre planned, pre discussed and I had been asking Bellator Media reps for a one on one with Bonnar through e-mail twice and in person tonight at the event….so I can assure you this was a random meeting and honestly one of the most bizzare experiences I have ever had. I was a bit scared or nervous because Bonnar was going nuts about Tito and McCully was standing there in a freaking spit mask giving me the eye. I was already hyped about this fight, but now I think the bad blood is real.

Check out the video below courtesy of Aaron Tru of MMAPrime.tv. Skip to the 3:00 mark to see the bizarre attack.